When my baby brother, M, turned 12 last month, I just couldn't seem to settle on a gift.  He loves Pokemon and Hot Wheels, but I'm so tired of buying him more of the same thing.  I was browsing through the kids' section of Artmart and feeling quite frustrated, when I called Mom.  I told her my dilemma, as well as the fact that I kept circling back around to this display of blank books with plain white covers.

Mom, being the great mind that she is, suggested I make him a book to write lists in.  It might sound strange, but M loves to make lists; lists of Pokemon characters, his classmates, toys he has,  people in his family, etc.  I could go on and on.  Whenever he spends time with Baby Bear and I, weeks later I will find a list of made-up baseball players folded up in my purse, or will flip open my notepad at work and find a list of all of the fire Pokemon characters. 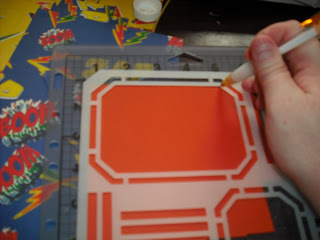 Working from Mom's genius inspiration, I bought two plain composition books at the local department store for about a dollar each and customized them for M's list making.  I chose the paper I wanted to use, then coated the front cover of the first book with my glue stick.  I lined the paper up with the binding, pushing it just under the edge of the black strip, and smoothed it onto the book.  Once it was firmly adhered, I opened the cover and trimmed the paper around the edges and did the same to the back, and then to both covers of the second book. 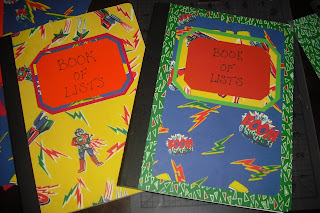 I cut shapes from coordinating paper using plastic templates and layered them on the front covers.  I titled the books "Book Of Lists" (original, eh?) and made a matching bookplates for the inside covers.  Next, I labled the first several pages with items to list, such as family members, favorite baseball players, years of Hot Wheel cars, teachers, etc, and wrapped them up.

I thought it was funny when he opened them and smiled, then asked me why I thought he liked to write lists.  ;-)
Posted by Lana at 12:29 PM

Skip to my Lou

Skip To My Lou gifts

A Few Of My Favorite Links